“Ferdydurke” is both a psychological and philosophical treatise and social satire. Full of mockery and powerlessness, the story of interpersonal relations, impregnated with inevitable absurdity and the overwhelming “mug”. Gombrowicz exposes the pompous seriousness and battles with the artificiality of form. He contemplates the issues of immaturity, youth and the oppressiveness of society and culture – especially Polish – noble, catholic and parochial. In the Fredro Theater, one of the classics of Polish literature and one of the best-known novels in the world is taken on by director Piotr Ratajczak, well known for his work at the Dramatic Theater in Wałbrzych, the Polish Theater in Poznań, the Contemporary Theater in Szczecin, the Silesian Theater in Katowice, J. Osterwa Theater in Lublin or Polonia in Warsaw.

The creators of the play, inspired by the main themes of the novel, talk about the liberation of man from the form imposed by both society and relatives, as well as tradition, the education system and media, the escape from the “mug” and schematic perception of another human being.

Former teacher of the thirty-year-old Józio – the main character of the show – takes him to a modern school, shows him a love story in a modern home and a multi-generational family. The world in which he exist is dead and the ideas are obsolete and out of date. The figure of Gombrowicz appearing on the stage comments on the existing world and points to the easement of Poles towards Poland – treated only seriously, as a symbol and duty. 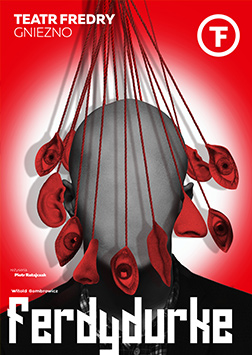 Other performances
This site uses cookies to provide services at the highest level. Further use of the site means that you agree to their useAgreeLearn more