The best known novel by Stanisław Lem, a classic example of the science fiction genre. The play was directed on our stage by Elżbieta Depta, a graduate of the Department of Drama Directing at the AST National Academy of Theatre Arts in Kraków, previously cooperating with the H. Konieczka Polish Theater. in Bydgoszcz (“Romville” based on the text of Justyna Pobiedzińska) and Stefan Żeromski Theater in Kielce (the play “War’s Unwomanly Face ” based on a reportage by Svetlana Alexievich and awarded at this year’s First Contact Festival in Toruń).

This time it will be a performance annexing not only the space of our small stage, but also the entire theater, enriched with multimedia and absolutely “cosmic” music performed live by Maciej Szymborski.
Lem in Solaris not only tells us the intriguing history of attempts to contact with the alien, but above all, asks questions about the condition of the human being. He creates the space for reflection about the universe and our place in it. At the same time, he manages to tell one of the most beautiful love stories in Polish literature. 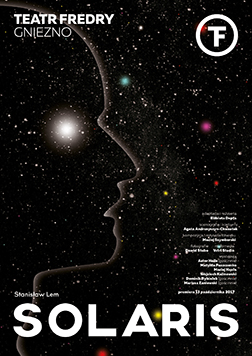 TICKETS
Other performances
This site uses cookies to provide services at the highest level. Further use of the site means that you agree to their useAgreeLearn more