Something comepletely new in the repertoire of the Fredro Theater in Gniezno will be an offer directed to the little ones – children from the age of 2. We would like to initiate the youngsters’ first meeting with the theater by inviting an extremely experienced independent Atofri Theater, which has been presenting its performances to the youngest viewers in Poland and around the world since 2008. An intimate space, the ability to interact with the actors, calm music and a cozy atmosphere will make the youngest feel really comfortable and nice.

The concept of „roads” and the actual roads that children are going through accompanied by adults will be the starting point in our reflection. We will tell you about the first steps, trips to the kindergarten, to a friend, to the shop, about walks, and also about the dreams of flying and riding the train. We will check what happens when two different paths intertwine, two people find a common route and what will happen when the roads divide. 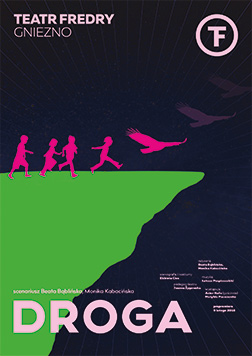 FESTIVALS (1)
Other performances
This site uses cookies to provide services at the highest level. Further use of the site means that you agree to their useAgreeLearn more